On February 17, 2017, the following Nike Women advert made its debut to the world. I watched this video several times and for many reasons especially since my research looks at Muslim women’s representation in sports and this video is timely.

1) The women represented in the video: As an American Muslim female also a sportswoman this video has so much meaning and power to me. You see a range of athletes, some who cover and others who do not. When Muslim women are discussed the conversation often falls within stereotypical categories — women who need saving from their oppressive cultures/countries/societies or the image of the hijab. These images and stories often come from a western media perspective and tend to paint Muslim woman in one broad stroke, forgetting that identities are complex and multi-layered. Muslims are not just from the Middle East, you have American Muslims, Russian Muslims, Canadian Muslims, hey there is a vibrant Muslim community in Cuba. There are also Black Muslims, LGBTQI Muslims, Muslims carry many intersecting identities at once, sometimes ones with conflicting politics, cultures and religious ideologies, as well as other personal characteristics and structural situations. Nike’s advert scratches the surface to show the diversity of Muslim women athletes (representing both hijabi and non-hijabi women) from the Middle East and North Africa region and the diversity of sports.

2) Let us talk about the sports represented: Running, boxing, soccer (futbol), fencing, ice skating, but for me, two specific sports brought a huge smile to my face; skateboarding and parkour.

These sports, also known as action sports. There is plenty of research and interesting movement in this field: Action Sports for Development Peace <— yes a shameless plug. So what is so important about these two sports? First of all, are they considered a sport? I do but others may not. What are action sports? They are known as surfing, parkour, skateboarding, BMX, mountaineering, and snowboarding which gained popularity in the 1960s – 1970s and were vibrant among youth (Thorpe, 2014). Since then action sports have evolved and the trend has gone beyond Western societies and has gained popularity in Eastern societies see Thorpe & Ahmad, 2013. Aside from the fact that it is gaining momentum among diverse communities, the world will get a glimpse of what skateboarding is all about at the Tokyo 2020 Olympic games. Parkour, also another action sport which has not made its way to the Olympics (yet), however, the world witnessed parkour in action during the 2016 Rio Olympics opening ceremony (time 31:50 – 35:00). There is entire academic and sport movement dedicated to what these sports mean to communities, how they reimagine spaces, and their relationship with race, gender, and class (see more work by Neftalie Williams about skateboarding and Holly Thorpe about action sports). Also, this was not the first time a Muslim female skateboarder was in a video, remember the beautifully crafted images of Afghan girls in Kabul where Skateistan teaches skateboarding to youth, even this video Saudi female movement to end male guardianship. And want a little more girls skateboarding (brown girls skateboarding!) here is another beautiful visual example of skateboarding in Banglore.

3) Muhammad Ali: My role model whom I was fortunate to have met, so did anyone catch the little nod to him? If not here it is: 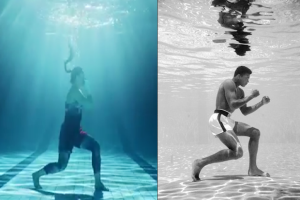 Why I found this image and nod important. (1) There is an entire story behind this famous shot you can read about here. As for the nod, he was an activist, Muslim, and an athlete who inspired so many of us (athletes or not). Currently, in the U.S. the Muslim Ban, a racist executive order signed by Trump has been wreaking havoc, tearing apart families, and contributing to the rise of Islamophobia in the US and abroad. When the ban first came out, people spoke out in numbers including athletes (a list I have been compiling and will add to my site soon). At the same time there were those who came out in support of the ban and Trump (i.e. Under Armour). While UA was getting lashed out by handful of athletes (Stephen Curry and Misty Copeland) and the world, Nike put out the following advert Nike Equality promoting diversity and against the ban. I think the little homage to Muhammad Ali was Nike’s way of reminding us one of the greatest athletes was Muslim.

4) The script: الناس هيقولوا عليكي ايه translation “What will they say about you?” So coming from a culturally rich and Muslim background this specific phrase as a girl/woman one always heard and I still hear it. As a girl “you shouldn’t be out here…” it is “…unladylike…” So this specific phrase “what will they say about you?” is not a phrase made up for this particular Nike video, it is culturally rooted and is one of many barriers along with religion, race, class, socio-economic background, basically multiple issues that Muslim women encounter to overcome and achieve whatever they seek. By taking this phrase they held up a mirror to society and their perceptions of these athletes (stereotypical and at times true), which in this video went either way: negative or positive. Through statements like “maybe they will say you are strong” or “you will always find a way”… they flipped the conversation of society potentially being supportive and raising these women up “maybe they will say you’re the next big thing…” as a little girl enters a skating rink and the video ends.

Nike has had its issues regarding their sweatshops and its continuous struggle with the Native American community concerning the imagery used by sports teams (often racist).” This video is packed with power and inspiration, showcasing current female athletes from the region: Ines Boubakri (Fencer, Tunisia), Arifa Bseiso (Martial Artists, Jordan), Zahra Lari (Figure Skater, UAE), and Amal Murad (Parkour trainer, UAE). At the same time subtle messages about representation, culture, sport and society packaged in a 2-minute video.

p.s. I am still trying to identify the skater, soccer player and the other boxer.

Are you a woman working in the Aotearoa New Zealand sport and/or fitness sector?